On Saturday 8 October, at the Kyro Art Gallery there was the inauguration of the exhibition "Microcosm: Forms in the making - Mineral and vegetable alchemies" by the artists Simoncini-Tangi, Daniela Simoncini and Pasquale Tangi. In particular, the exhibition will host two projects: “Sé-me. Morfogenesi Sapiente” and “Le Sculture del Tempo”.

The Simoncini.Tangi project was born from the meeting of two different worlds, on the one hand the artistic and theatrical one of Daniela Simoncini, originally from Poggibonsi on the other the technical-scientific one of Pasquale Tangi, born in 1980 and originally from Faeto (Foggia), graduated in Industrial Engineering.

“Sé-me. Morfogenesi Sapiente” is an extraordinary journey through the intelligence of plants. The project came to life during the Vegetable Future Master held at Villa Barini in 2019, near Florence, by Stefano Mancuso and Leonardo Chiesi: "Sé-me, a symmetrical capsule on gold leaf, is a reflection on the ability of seeds to perceive and react intelligently to environmental stimuli. A seed is a wise living being: it knows what it will become. Dynamic and intelligent organism, it will only wake up when it finds favorable conditions for growth. A tireless migrant, he moves in space and time, patiently waiting to open himself up to the world. "

“Le Sculture del Tempo” is instead a project that provides an interesting journey through the world of goldsmithing: "The techniques of goldsmithing, such as fretwork and lost wax become an opportunity for artists to create small sculptures to wear or to observe more closely, forms in the making that remind us that we are all connected and intertwined with each other's life. " The philosophy behind this project derives from the thought of the alchemist Gastone Bachelard, who speaks to us of the "germinating force of metal".

The exhibition will take place at the Kyro gallery, in via P. E. Barsanti 29, in one of the main streets of the historic center of Pietrasanta, from Saturday 8 October to Saturday 22 October 2022. 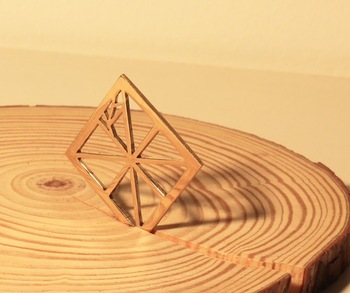